Although it may seem a lifetime ago now, cast your mind back to this summer, 2018 – the seemingly never-ending heatwave that made headlines across the UK. So you can imagine John-Oliver and Cara’s August wedding was expected to be a scorcher – champagne on the lawn, guests fanning themselves in the late summer sun.

Well, it was none of that. It might actually be one of the wettest weddings I have ever photographed! A couple of days before the wedding – when we realised the weather forecast effectively said “drowning!” – the groom John-Oliver rang us up to see what the plan was now. They remained very calm and we hopefully reassured them that we knew what to do – and despite Alanis Morissette’s best efforts to make us dread such an occurrence, it was the most magical wedding. I don’t think the bride and groom stopped smiling the entire day. 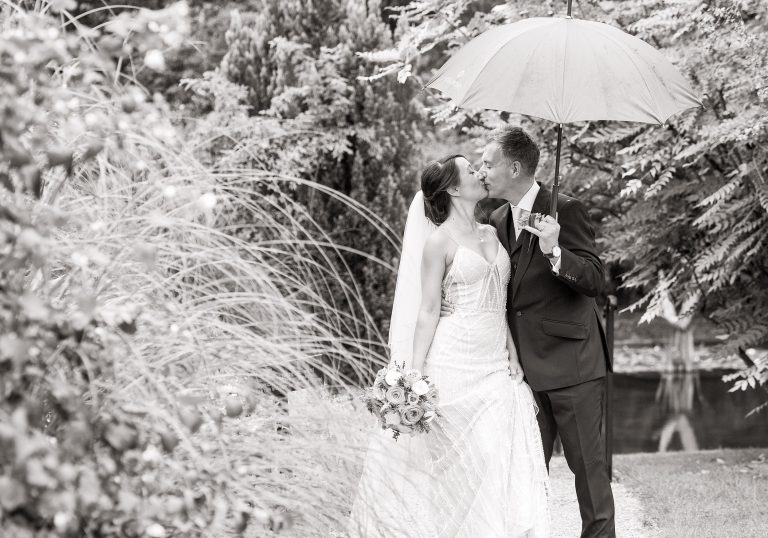 So I turn up at the Oxford hotel the bride and groom are getting ready in, and it’s raining so hard that by the time I get inside I’m already soaked through – there’s just water bouncing everywhere. Unlike most weddings – as well as getting the preparation shots – I was due to go across the road with the groom and best man to photograph them having have a proper old-school, lying on a chair, hot towels cut-throat razor wet shave. 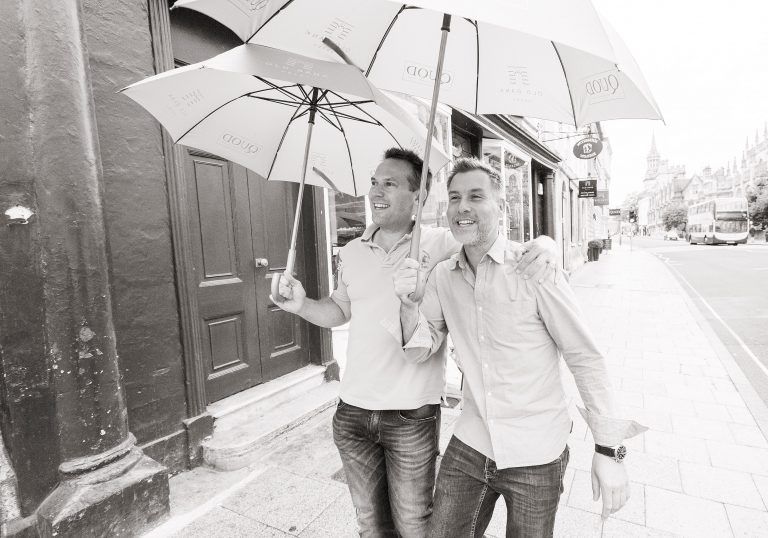 The three of us walk in the now torrential rain to the barbers, and get absolutely drenched. So I know that’s me damp for the rest of the day! But it really was worth it, because the shots of him having his wet shave and chatting are just really special, and it’s a nice, slow, easy build up to the day ahead. After this, I went back to the hotel to meet with the bride. 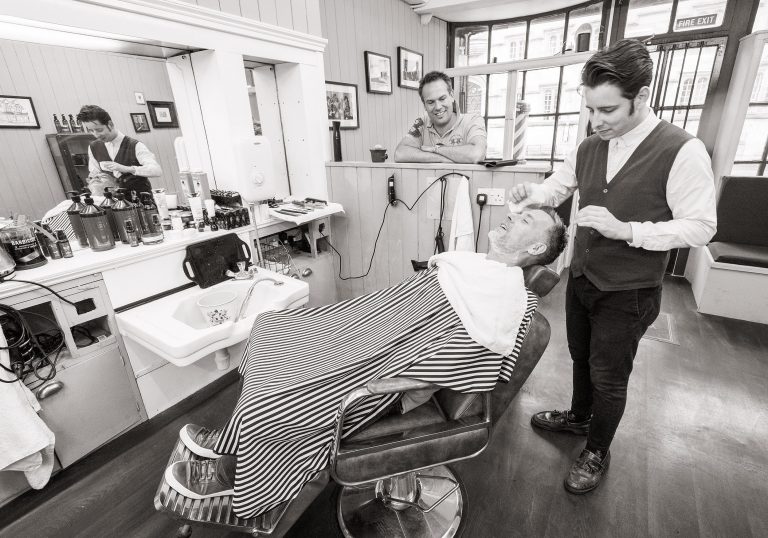 Cara and her bridal party are getting ready: there’s makeup, hairspray, nail varnish – and then there’s her dress hanging on the back of a door. There are lots of different styles of wedding dresses and lots of different styles of brides – generally they marry up (pardon the pun). But with Cara, she is quite quiet, very beautiful, with a gentle and calm presence. Yet the dress she’d chosen was really quite sensual. I knew she’d look a million dollars and there wouldn’t be a single pair of eyes not just captivated by her when she walked in in this dress. I think one of my favourite photos and moments of the day was the first time I saw her in it. She was absolutely breathtaking. 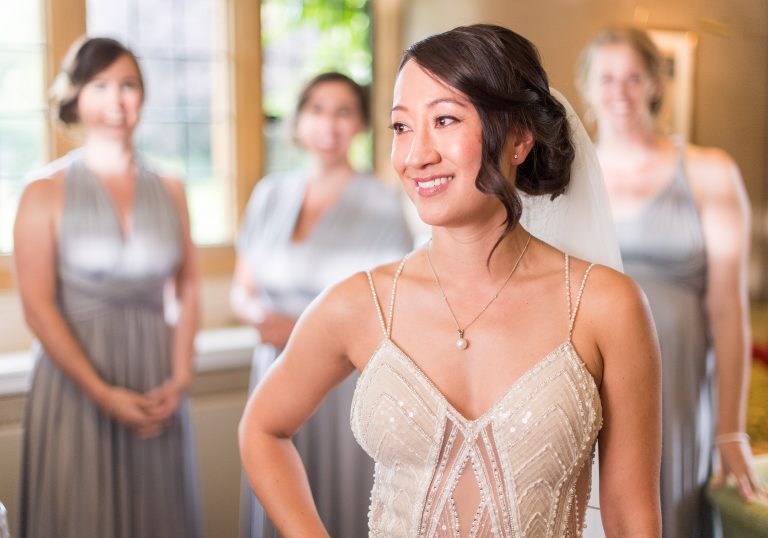 At this point, I know it’s going to absolutely break John-Oliver when he sees his wife-to-be in this dress – he’s going to be speechless. I just know it. And so I make a mental note to myself to ensure I get the shot when he first sets eyes on her – because it is going to be one of those once-in-a-lifetime moments.

A gift from the bride to her husband to be

I then spent some time with John-Oliver and his groomsmen to get some lovely shots with those guys. I was lucky enough to be there for one of the most special moments of the day. 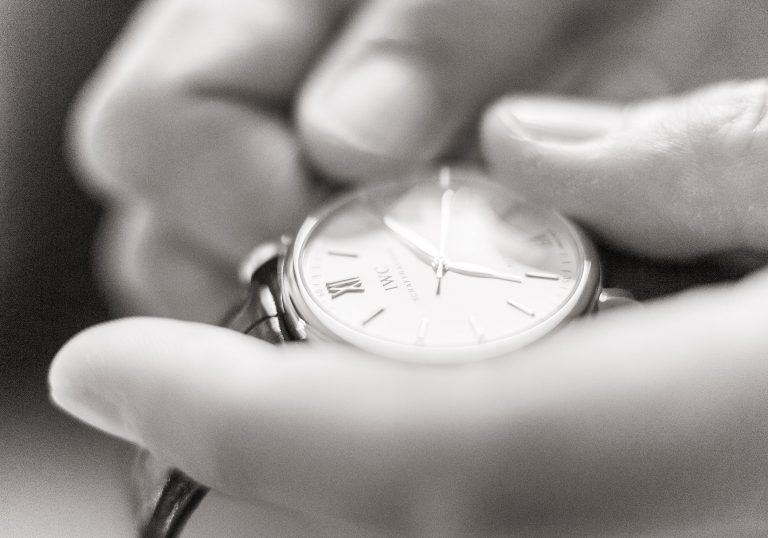 I know say I use the word privilege quite a lot – but as a wedding photographer, you are stepping inside people’s lives with a camera – on the most important, most emotional day of their lives. They give you this access – not just to the pictures, but to their feelings and emotions, too. It feels like a tremendous honour to be involved in people;s lives like this.

Cara had gotten her husband-to-be a wedding gift – the most stunning watch and a note alongside it. John-Oliver was visibly moved by this, it was very emotional. He then proceeded to show it off to everybody, like the bride would show off a wedding ring. It was a great moment to be able to capture and be a part of.

You can’t rain on their parade!

We now need to think about getting the bride and groom to their venue – the fantastic Le Manoir Aux Quat’Saisons – without them getting completely ruined by the torrential rain. 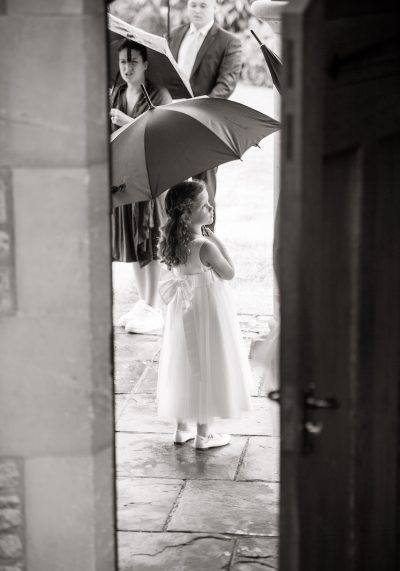 But as with everything, there are tricks and you can always figure these things out! Everything is set up and ready to go – and the groom has made it safely (and relatively dry!), now waiting for his bride to come in.

This is another favourite shot of mine from the day. This beautiful bride walking in to her wedding, with the heavens just opening on her. Her head is up, she has the biggest smile on her face, and she has a team of people around her keeping her dry. It really says she is about to marry the love of her life and she won’t let a bit of rain stop her! 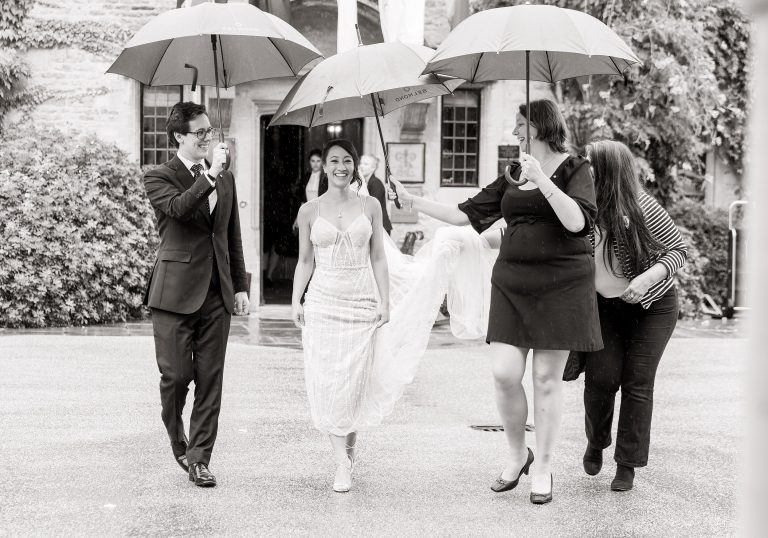 I mentioned earlier that I wanted to make sure I got that shot of John-Oliver setting eyes on his bride for the first time – so I run back to ensure I don’t miss my moment. We can’t always get this shot because of angles, but today it was perfect. I positioned myself and waited for the second he turned his head to see Cara walking up.

I managed to capture that moment that he saw her for the first time, which is just amazing when you get to do – because that’s the thing he’ll remember for the rest of his life – and I know that because he’s told me! 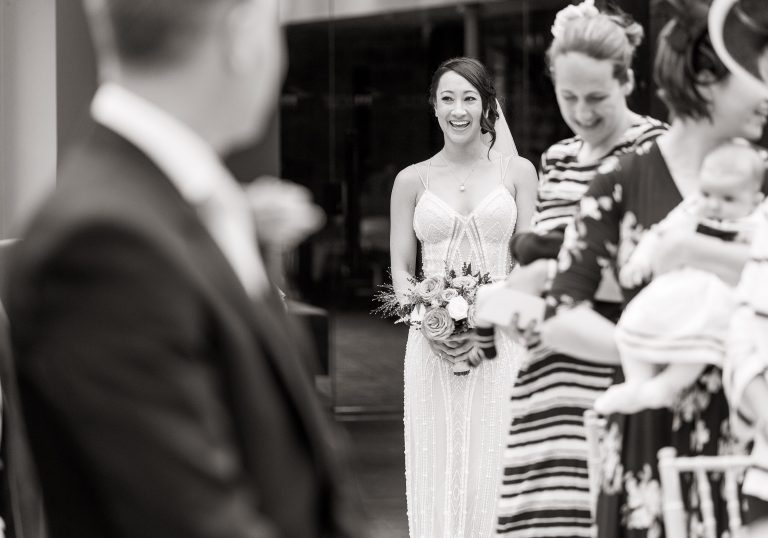 When John-Oliver came back to see the pictures, that was the moment that he broke into tears. He just knows that he’ll remember that split second that he saw his beautiful wife-to-be for the first time on their wedding day. Saw the way she looked, how excited she was, and saw what she was wearing as well! He just knew how special all of this was. And as a wedding photographer, I am beyond happy that I was able to capture this moment for him.

Getting best photos when it rains on your wedding day

It’s never easy to get outdoor shots at a wedding when it’s torrential, but we managed to make the most of it and got some fantastic shots. We’d wait for natural breaks in the rain and rush outside, ensuring the bride and groom were under umbrellas and we had towels for underneath her dress. We also used huge open doors into the garden as a backdrop – which meant it looks like you are outside but actually sheltered. It’s all these little tricks you pick up after years in wedding photography that make such a difference to the shots we get. And I think we managed to take some magical shots for John-Oliver and Cara – a couple so in love it’s untrue. 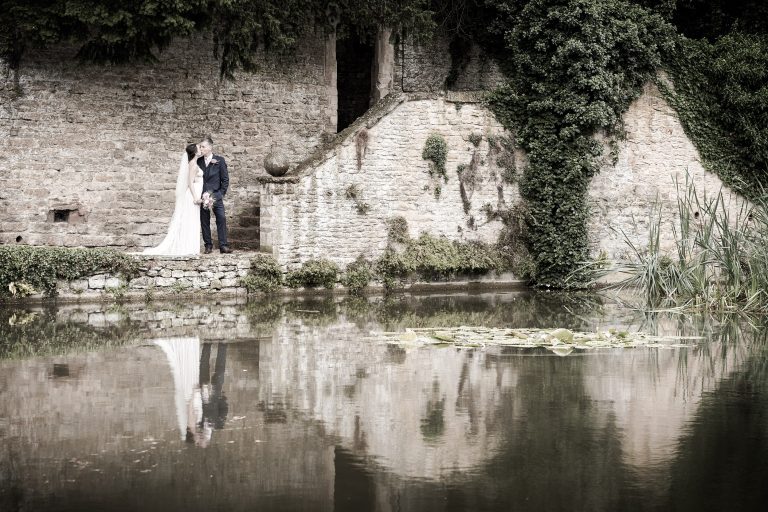 One lovely little touch was that towards the end of the evening, John-Oliver and Cara presented me with a very special bottle of wine just to say thank you for everything myself, Sarah and my team had done. It’s always touching when that happens, because you try so hard to make their day flawless. You try so hard to make sure you’ve done everything they’ve asked for. You try so hard to create these images that will be with them for the rest of their lives. To be thanked even at a point where they hadn’t even seen the pictures, says that the service and the care and attention that we’ve put into it was acknowledged and that little thank you meant the absolute world to us.

So, thank you John-Oliver and Cara. It was a privilege to capture the memories of your wedding day – and for giving me the opportunity to take some of the most beautiful pictures I’ve ever taken. The Paul Wilkinson team wish you a lifetime of happiness.

Are you looking for a wedding photographer? Please with me and my team today to learn more about the services we offer to make your big day timeless.

Ben and Amy: A Wedding To Remember
Posing Portraiture Superclass at the SWPP Convention 2019
We use cookies on our website to give you the most relevant experience by remembering your preferences and repeat visits. By clicking “Accept All”, you consent to the use of ALL the cookies. However, you may visit "Cookie Settings" to provide a controlled consent.
Cookie SettingsAccept All
Manage consent