We select our suppliers carefully because of the quality of their products and the surety of their customer service.  It is an added bonus that one of them is in a picturesque corner of Northern Italy. Sarah and I sacrificed our valuable time to go and visit the manufacture of the beautiful albums we create for you.  That’s us: putting ourselves out in the interest of our clients!

OK, I’ll be honest here: although we headed to Italy to visit the Graphistudio factory and see, first-hand, our albums being made, we took advantage of the opportunity of seeing some of a country that we both adore. 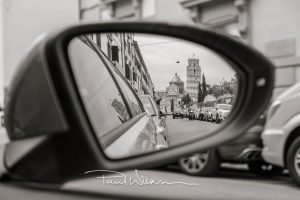 It’s not every day you look in your wing mirror and see something like THIS!

First, to Pisa in Tuscany.  I have always wanted to go to this wonderful city (and no, not so I can have a picture of me holding up the Leaning Tower of Pisa – though the temptation was immense!) so we flew into the local airport and jumped into our rental car.

Well, I make it sound that simple but, of course, it involved a half-mile hike (nearly a kilometre I suppose given we were in a fully metric nation) to a small concrete building with nearly no clues (in Italian or English) that this was where we were to fetch the keys to our transport for the next few days.  They helpfully also gave us a map. A small, green forlorn copy of what once must have been a cartographer’s pride and joy.

I looked at the dismal scrap of paper in my hand with an ominous sinking feeling: I suspected I should have downloaded the European map for my iPhone TomTom before I started paying the exorbitant fees for data roaming. Bugger. Still, the small green map looked to have the key points on it: airport, petrol, Tower. What could go wrong?

Not much as it turned out.  When I say ‘not much’ that assumes we ignore the eight times we encircled Pisa and the resulting speeding ticket I received in the post. I thought (naively) that I had adhered to every traffic law thrown at me – and judging by the celebratory horn-blowing from appreciative Italian drivers stuck behind me, who are more than generous with their audible feedback, I believed I had succeeded! But no.  One letter two weeks later, numerous visits to Google Translate and a suitably large bank transfer, it turned out I had managed to offend a speed camera somewhere on Pisa’s ring road.  I doubt that Galileo or his compatriots had that problem.

Having completed our circumnavigation of the entire Pisa region, we decided to stop and switch to walking. So we parked up and Sarah stepped out of the car and I sunk my head into the map only to hear Sarah shouting to get out of the car and take a look: there, right behind us was the Leaning Tower.  I have seen many things in my time, but the site of this World Heritage monument, right slap bang at the end of the road we had parked (it was in my rear view mirror!) was the kind of thing that takes your breath away!

Pisa is a wondrous place and we loved it.  I think I could have lived without thousands of tourists all trying to take a picture of themselves doing various ‘funny’ things to the Leaning Tower, but that aside, I recommend everyone should go.

I’m the son of an engineer so, of course, it was a highlight to finally ascend the famous leaning tower.  You do need to book well in advance (and woe betide anyone turning up even thirty seconds early: trust me, the guards look at you like you have just pee’d on their perfectly shined boots and send you away with strict instructions to only return at your allotted time) but it is well worth the slightly disconcerting climb, careering from one side of the spiral staircase to the other, hundreds of years of intrepid footsteps having worn an uneven furrow, guiding your feet in giddy spirals around the tower.

You arrive at the top, breathless, giddy and enthralled. The view is stunning! But be aware they really do ring that bell and it is loud! 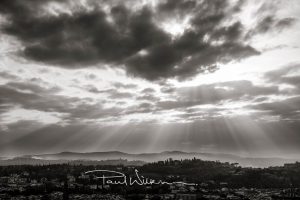 Next, it’s to Florence and I cannot contain my excitement!

My only disappointment was to discover from one of the guides that Galileo never dropped two balls from the top in his proving that all objects fall at the same acceleration.  Damn.  I had been brought up on this urban myth and it turns out it was only ever a thought experiment.  I blame my education.  It didn’t prevent the day from being a lifetime highlight however.

The tower isn’t the only thing to be seen at this magnificent UNESCO World Heritage Site – in fact, the moment that nearly reduced me to tears was the sound of a single, solitary tenor voice in the Battistero – every hour or so, he comes out and simply sings single solitary notes, one by one.  As each note reverberates around the space (the sound lasts for tens of seconds at a time) the next note soars up to join it and they interweave into the most incredible chords and harmonies. That alone was worth the trip.

Oh, and we indulged in one of the best street-restaurant pizzas we have ever had. Though it might be the company and the setting that made it simply perfect!

In the next post, we get to Florence which simply blew us away! And we thought Italy couldn’t get any better!

Unusual Image Request At A Wonderful Hampden House Wedding
Libby, Luck An’ A Load Of Laughter